Imposingly Scarred By The Bliss Bombs 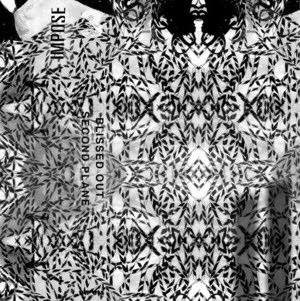 Blissed Out, 3 Brooklyners who love their electronica loud, psychotropic and ever so slightly abrasive whilst still summoning up dance grooves and dreamscapes, are releasing a 4-track cassette as part of Impose Magazine's Cassette Series (its the third instalment behind Weekends and Birthdays - you can attempt to hunt them all down here). The basic premise is that the chosen band decides how many tracks they want recorded and whether its to be made digitally available - and thats pretty much it. Blissed Out's contribution, entitled Second Plane after a thinly veiled tip of the hat to 9/11 (what with 9/11 just around the corner AND the belief held by the band that it was an inside job), the tracks were thrown down between tours and showcases not only the musical direction they are heading in, but also their new third member Phoebe Pritchett and what she brings to the table synth and vocal-wise. The B-sides also highlight their amazing propensity to entirely recreate a song when they remix it (or 'edit' it). Check out some of these 'edits' on their myspace page, and sample second A-track 'Scarified' below. Oh, and if you didnt catch the split that Blissed Out did with the Dum Dum Girls - too late, they're all snapped up.

NB - posts of previous Impose Magazine cassette devotees Weekends and Birthdays up in the next few days.
Posted by Brendan T