Kong & The Bronx Deliver Us To Nine 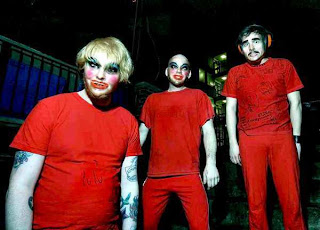 Manchester's Kong are one of Sonic Masala's absolute favourite live acts - not just in the UK, but the world. This three-piece are dark, stark, and raving mad, merging Fugazi and The Jesus Lizard in a Shellac sandwich that seems so hellishly perverse that your first instinct is to turn away - until you blink and find yourself in orgiastic hedonism...
The Bronx have been destroying speakers, stages and the sound barrier since their bone rattling self titled debut back in 2003 (and have since released 2 killer albums, both self-titled also). Ive loved these Los Angeles heathens since seeing Matt Caughthran down a bottle of red during a sweltering afternoon set in Brisbane, Australia back in 2007, whilst tearing the place apart with their hardcore rock alchemy.
So it is our absolute heaving pleasure to bring to you 'Count To Nine', a track that Kong recorded with Bronx lead Caughthran on guest vocals. This came about last year after the two bands played an unbelievably blistering set at ULU after Breeders ATP, and which was a B side on the now sold out Kong 7" of 'Leather Penny' from their evil debut LP Snake Magnet. Brew Records are putting it out for free on Kong's new Bandcamp site here. It is pure Kong, with some Caughthran bile-spitting vocal shredding. Brilliant.
Kong (feat Matt Caughthran of The Bronx) - Count To Nine
Also brilliant news is that Kong will be touring in November in support of 65daysofstatic. They'll be playing the CAMP Basement on 26th November. If you havent caught Kong yet, then do so here - they are electric. They will also be showcasing new material after preparing a 10" with That Fucking Tank!, Castrovalva and Shield Your Eyes, all courtesy of Brew Records. This sounds like an amazing release, one that SM will be snapping up for sure!
Kong - Sport
Posted by Brendan T