The Beast Has Been Awakened 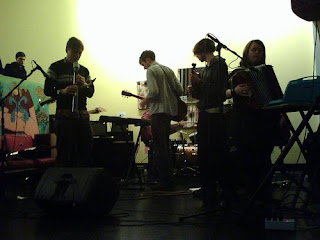 Another Bad Panda entry. This is an older one though, yet I think it warrants a mention. I posted about Leeds' These Monsters and their unique take on instrumental stoner post-rock. I still adhere to the notion that Be There Dragons

Beast, Please Be Still have their own take on post-rock, which is somewhat gypsified. A seven piece collective based in Seattle, their vision is sweeping and yet skewed. Think samurai freakout folk dungeonsanddragons civilwar era honey bee cellphonetower postrock endoftheworld apocalypse culture flowerinthebarrelofashotgun knockyoursocksoff likeyeah machine soundtrack casino film noir dicktracy detective novel saxophonelandscapes electronicwind buzzing japanese anime characters running clouds invisible ark traveling hollowearth tropicalislandformerlyknownasantarctica - and you are on the right track. Their usage of varied instruments such as the harpsichord is what gives them their quirky scope. I cant find much that they have released since their 2007 self-titled LP, other than a full gig recording they did in July 2009. But if these tracks and performance are anything to go by, they are a great act that would be well worth the time and effort to hunt down - or at least poke with a stick until they come out of hibernation...