Beerenberg Has The Time...and Diamonds 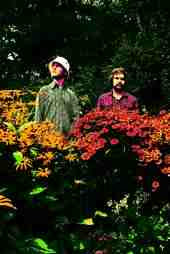 Beerenberg are labelled (press released?) as a psychedelic rock duo from Norway. Geographically Beerenberg is the northernmost situated active volcano in the world. And never the twain shall meet, right? Well, not quite... Beerenberg's rock palette is somewhat lighter than that of which we post - there is no drone, no A-bomb blasted desert terrain, and very few swirling primary colours. Instead we have quietly cultivated tracks that are delicate and robust in equal measures, which makes them a compelling listen. They only released their debut single, 'Revival', in July, and have just dropped their debut EP, Where Did The Time Go?, which is technically speaking a single release, as it serves as the vanguard for the release of their debut album Wizards, Freaks and Ancient Magic in the upcoming weeks. Nevertheless, the three tracks give you something of what to expect here - the title track is gentle and sweeping, a simple folky ode that lingers due to its orchestral flourishes and slight Eastern inflections; 'A Day On The Beach' is a windswept moody affair with faintly tundral frigidity that adds to its allure. These tracks play bookends to 'Diamonds', in my eyes the centrepiece of the EP, which plays more into the genre in which they have been placed. I wont say much more, other than you can watch a vid for each track below. Id really like to hear your views on these guys, as their pulling power for me has been a bit hard to put my finger on. Their mood is steeped in nostalgia - bands like Neu! spring to mind, although you can dig deeper Im sure. I just wanna keep playing these songs - have been since last night - and cant put them to rest. Hopefully, neither will you.
Beerenberg's releases can be sought out through Spring Vibes Arkestra.