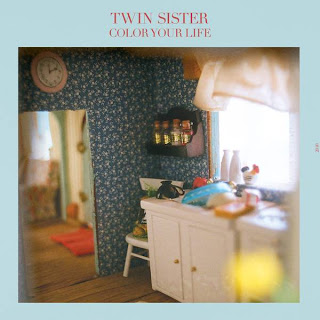 I'll be honest here and admit that I've been a bit slow off the mark when its come to Twin Sister's Colour Your Life E.P. And with the ruffled feathers from Brendan's Frankie Rose and the Outs post you might have thought we would lay off the girl fronted bands for a while - no sir! Its an interesting conversation that should be had, seeing as this blog started 'cos of a bunch of mates talking about music, and different opinions lie at the heart of that. We would love to hear yours, comments are always welcome at Sonic Masala.

Right, first off I like Twin Sister. I like them a lot, although that may surprise some people. Personally Twin Sister is not a band to be taken on the strengths or weaknesses of a single song or a track in isolation. Across the six songs that make up Colour Your Life there are headline grabbing, dream pop master class tracks such as 'All Around and Away We Go' or 'Lady Daydream' with their slick electro tinted bliss, and of course the joyous haunting whisper that is Andrea Estella's vocals. Its all very fresh and slick but with a touch of melancholy that keeps you a bit spooked.

'Phenomenons' follow a similar recipe and if this was Twin Sister's blueprint then it would be easy to call the band just perfect dream pop. But that's not the case. Tracks 'Galaxy Plateau' and 'The Other Side of Your Face' point to Twin Sister's many facets and thus making them so much more intriguing - here soundscapes and static take over, rhythm and vocals creep into life and its these drawn out forays into a dream pop netherworld that really point to an more experimental nature that could promise so much and consistently surprise. Here's hoping that Twin Sister's debut L.P, when ever it drops, treads a similar path.