Garage Degradation In The Name Of The Lord 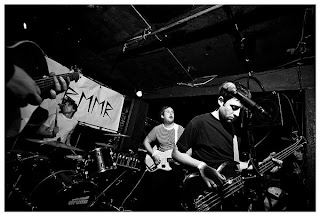 Ive been a very naughty boy. I have promised myself, and others, that I would post about these guys before, and have failed to - basically sitting with my thumb up my bum does not a post make! So Ill try to do as good a job as I can.


I introduce: Sex Church.
Now, these guys from Vancouver, Canada, arent exactly a hidden gem. They arent entirely gemlike either. These boys have been riding various blog-boosted waves since late last year. And their sound is anything but pristine - this is thrashy, dirty, fuzzy, scuzzy, sweaty garage rock with a mainline injection of not giving a fuck. The marriage of distaste, disappointment and paranoia with the propulsive drones of kraut mechanisations and distorted black masses of noise threatens to swallow you whole. Its not necessarily brutal - there is a hell of a lot of fun to be had here, and some tracks like 'The Floor' are just great sprawling garage jams - it just that its done at such a sleazy speed in a darkened room that you're likely to get whiplash, carpet burn and pregnant at the same time.
You want to own their debut LP Six Songs By Sex Church (out through Convulsive Records) and Sacred Bones). Scratch that - you need to. Your life depends on it. Just get it. And the best thing about this psych garage nonstop fuckup is that you know there is plenty more in their supply tanks. Trust me, one whiff of this and you'll be scratching holes in your arms just to get another lick of it.
And once you are fully addicted, you can chase down more fixes in the format of Sweet Rot Records 7"'s and HoZaC Record's Singles Klub from earlier this year. You're in good, devilish hands then...
Sex Church - Dead End
Sex Church - The Floor
Sex Church - Ghost