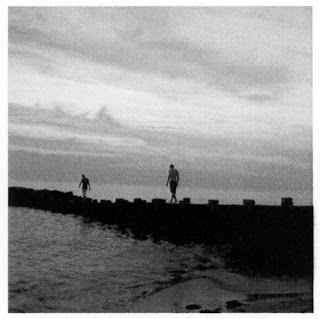 I listen to a lot of music. Pretty much par for the course really. And its hard to keep track of an act or album or track when you have new stuff flooding the earwaves every day. So Im going to admit that I have done something terribly remiss - I forgot about Soars. I heard their track 'Throw Yourself Apart' a couple months ago over at Massachusetts based blog Clicky Clicky Music. It is really, really good. I was immediately struck with the notion that had Blonde Redhead, on the cusp of writing and recording Misery Is A Butterfly, listened to Loveless ad nauseum, they would have created something like this. Then I absolutely dropped the ball - I was kind creaming over Women and Puffy Areolas then (double entendres a plenty there...) - and Soars floated away...

But Jessi over at Goldest Egg wouldn't let me forget, and its to her eternal gratitude I must bow. For the Philly brooders have released their self-titled debut on La Societe Expeditionnaire, and Im gaga over it. Honestly, I like a lot of stuff, and champion a lot of stuff, cos there's a lot of rad stuff out there to be liked and championed. But for me, Soars is rocking up into position for one of 2010's top albums. Don't let this be a forgotten gem! The album literally does soar - hinging on dark delayed reverb heavy guitar lines that menacingly caress, made more beguiling by the distant yet achingly beautiful delivery by vocalist Chris Giordani. Can you hear Fever Ray? Can you hear Zola Jesus? This is atmospheric Gothic shoegaze.

A thing of dark beauty, Soars comes out October 5th - buy it through Chicago Independent.