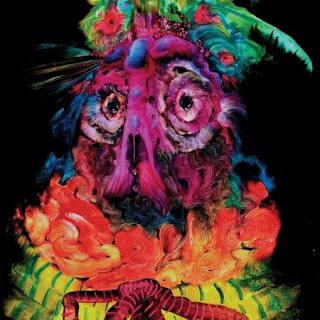 I'm not gonna beat around the bush. We focus on a lot of psych bands here of all ilks and persuasions. We've had some good psych bands bring out some good straight up psych albums - Secret Colours, and Black Angels immediately comes to mind. And then there is Toronto's Quest For Fire. I'm not sure yet - I have to listen some more, its been in and out of the playlist this past week - but the more I take it in, the more I think Lights From Paradise could be the best straight up psychedelic rock album of 2010.

Massive call, right? Well, it has all the hallmarks of a classic psychedelic rock album - the ritualistic stillness of opener 'The Greatest Hits By God', to the 70s rawk-ness of 'Set Out Alone' and the trapped in amber stoned warble of 'In The Place Of A Storm'. Each song sets out with a purpose and sticks it out to its fiery end, not displaying the schizophrenic sonic shifts in tracks that some of their modern equivalents are prone to. And that isn't meant as a particular negative - many bands thrive in the altered time signature changes and shifts in tempo and velocity, but it is also somewhat refreshing to have a band show their different shadings spread out over an entire album rather than on a single song.

Quest For Fire didn't get enough praise for the brazen sun-kissed blasts of distorted waves they cut on last year's self-titled debut, but fingers crossed that Lights From Paradise does them justice, as it is awesome. And if you doubted the Toronto band's pedigree, two of them tour as the backing band for Black Mountain side-project Pink Mountaintops, whilst they are now supporting Black Mountain in a series of dates. Oh, and A Silver Mt Zion's Sophie Trudeau makes a guest appearance on the record. So yeah...buy it!!!!!!!!!!!!!!!! (NB Hold yr horses - its not out until November 8 through Tee Pee Records - I'm just lucky enough to promo it! Still, get the debut, pre-order the newie, and drop out in glory).