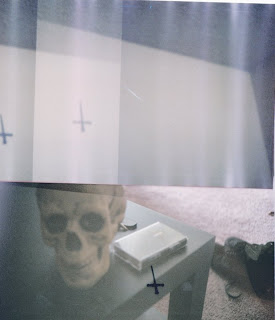 Hip as fuck-sters Crocodiles are doing their best to not get caught rehashing themselves. Seeing as Crocodiles itself is a new direction by members of The Plot To Blow Up The Eiffel Tower, this is impressive. We heard a track from Sleep Forever, their sophomore effort after the much-lauded Summer of Hate, and it shows a cleaner, poppier approach to their snarling scuzzy post-pop. Now they are releasing Fires of Comparison, a four track EP that has the leatherclad brooders shifting styles, showing samples, and vetoing vocals altogether for what proves to be a great little instrumental record.

Each song has a different approach - 'Kill Joe Arpaio' is a Girls Versus Boys-lite driver, all slink, smirk and menace with the looped radio samples; 'A House With Skin Like Yours' is a stamping monotone, with reverbing guitar and incessant tambourine evoking a blue soaked Western vista replete of Wayne's and Ford's, replaced instead with Gallo's and Jarmusch's filling their snakeskin boots whilst BRMC revisit their roots at the local saloon; the title track sits comfortably with John/Ono noodlings and shimmering guitar with white noise overload from a data projector; with 'Hearts Reprise' coming at the bottom end with minimalist blips and sonic veils, a muzak number if imagined by Melbourne indie wunderkinds Minimum Chips.

I never thought I would say this - but Crocodiles have actually submitted a release that is not saturated in its own self-worth; that is not pandering to the disaffected masses; that is not bleeding kudos from the quiffed copouts and the denimed slackers that mark out their peers. Dont get me wrong - these guys are continually walking a hipster tightrope, threatening to disappear up their own arseholes at any given opportunity (we got strep from doing crack with a hobo; I cant do interviews cos Im stoned; Im sweating profusely cos Im wearing leather but refuse to take it off yadda yadda), but they are proving their worth as frontrunners for the new bands of the beginning of this decade. Which bodes well for Wednesday when Sleep Forever is due to hit...

Download Fires of Comparison from Fat Possum Records for free here, and sample 'A House With Skin Like Yours' below. In the meantime Crocodiles are finishing up a tour in the US with a New York gig with Reading Rainbow and The Girls at Dawn, and start a new one with Golden Triangle and Dirty Beaches late October. In between Crocodiles are treating us here in the UK with the first tour after releasing Sleep Forever - lucky us! SO get tix for the Hoxton Bar and Grill (5 October) or the in-store at Rough Trade East (14 October), or catch their shows spread across the land.

Crocodiles - A House With Skin Like Yours
Posted by Brendan T