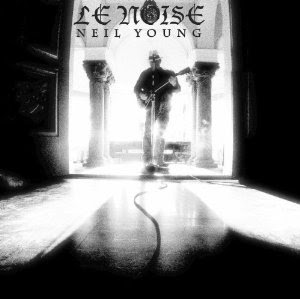 I cant speak for the rest of the SM crew, but I am a rabid Neil Young fan. My first (and currently only) Glastonbury was 2009, and I only went to see him wield Ol Black - and he blew the place apart. His biography Shakey is one of the best books Ive read of any genre. He is a demi-god, a rock behemoth, a folk godfather - a musical icon. And even though he hasnt released a brilliant album (in my mind at least) since his soundtrack to Jim Jarmusch's seminal existential Western Dead Man, he has always been interesting, relevant, and at times still goddamned amazing.

So when he develops new material I just about lose my shit every time. Therefore Im losing my shit as I type this, and have been since the weekend, as I have started dipping my toes in the water that is Young's next opus, Le Noise. It is a unique record for Young as there is no band in any way - it is just Neil on guitar, in a room, using lots of dub overlays and effects, with consummate producer Daniel Lanois fiddling the knobs.

And I can safely say its his greatest album in a long, long time.

As I have only listened to it once all the way through, Ill let some more knowledgeable critic tell you what to expect over at TONEAudio. Needless to say, it is a continuation of Young's mesmeric career to take his music where no one expects him to, always willing to make brash and unorthodox decisions in that quest to tell his story, the way he wants to tell it. And apparently this album (unsurprisingly) was MADE for vinyl, so make sure you pre-order it from the source here.

But in the meantime, you can have at it - stream Le Noise over at NPR here.

Enjoy this start of the week...