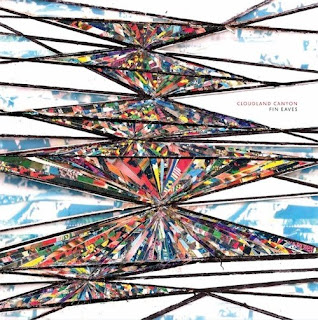 Sorry about the lame heading as wordplay, but anyway...

Cloudland Canyon are releasing their 1st LP Fin Leaves this week on Holy Mountain Records (home of the likes of Wooden Shjips, Voice of the Seven Thunders and International Hello). Ive been lucky enough to listen to it in its entirety, and it is a very fine piece of work.

Starting with the 1 and a half minute title track, Cloudland Canyon make their point known from the outset - and it isnt an easy one to make. This is ambience from both the dark and the light end of the spectrum, all intermingled so as to become indistinguishable. We've already posted one track, 'Mothlight Pt. 2', and it is fairly indicative of what to expect here. Nevertheless it might be said that that track is the most accessible stand alone track on Fin Eaves, and that there is no way to listen to this album other than from start to finish, on repeat, for hours, as the sun wanes in the west until it rises again in the east. Its a truly mesmeric record of shimmering propulsion. Remember that Justin Beiber track by Shamantis from last week? The one that fucking kills like no other? This to me is a true kinsman - I could lay them side by side and watch them have a million babies and flood the world with their ethereal gorgeousness and drown in their relentless cymbals, echoed vocals and riptides of reverb and Id die a happy man. No need for a Noah's Ark - the end of the world never looked so blissful.

So what do you call this band? Id coin chillgaze (if it hasnt been coined already) - taking the best of chillwave and fucking it whilst listening to cassettes of MBV and JMC. Excellente.

Cloudland Canyon - No One Else Around
Posted by Brendan T