New Crystal Stilts Shakes the Shackles and Plugs It Up 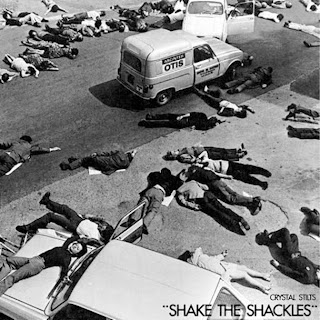 I wouldnt have posted about this - many others have already - but its prevalent to a previous post, and its awesome to boot, so...deal with it.

Another conversation I had on the weekend at the glorious balcony BBQ we had (see Dungen's post for enlightenment), was on the current trend of bands to play that fuzzy, scuzzy dreamy summer pop thing. My opinion was that the bands to encapsulate that sound first may have ignited the craze, but as months have gone by other bands have come out that either diminish the sound (and to be honest, I think that includes most of the genre) or usurped them in their competency. I threw out the two Crystals - Antlers and Stilts. However I was shouted down about Crystal Stilts, that their sound was still distinctively loud and dirty, and that I should give them another chance (there was no such outcry for the Antlers though - sorry...)

And would you know it, but then Crystal Stilts bring out some new tunes, like Carrie's hand pushing through the freshly turned earth of her grave (that I had admittedly dug that night) and grabbing my ankle, reminding me that they will never go away... 'Shake The Shackles' will be available through Slumberland Records in October, so you still have a month to have the hard copy. Nevertheless, here it is, and I am eating humble pie. It is true swampy drone rock, and has me salivating at the thought of a follow up to the stellar Alight of Night, (and proving that they aren't missing Frankie Rose...but thats another story...).

Shake the Shackles by Crystal Stilts