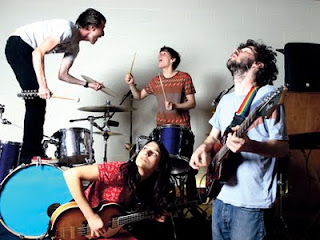 Welsh musical collagists Islet are not resting on their laurels. Having released their mini-album Celebrate This Place back in July, they are already prepping a follow-up mini-album, Wimmy (via Turnstile), and have thrown down this track as a taster. Whilst not as strong as previous material - its more twee and restrained than I was expecting - it is as busy and manic, highlighting the band's ADHD activity, instrument swapping and innate sense of fun. They are a very good live act, never staying still, swapping intruments at will, using the environment as percussion, crowd interaction, yelps and moans a plenty - their support for Mi Ami at the sadly no more Bardens Boudoir highlighted this.
Pre-order Wimmy from Rough Trade here. Sadly they havent as yet announced a London show before the end of the year, but they are playing the likes of Brighton and Cambridge - in fact most of England - what have we done? - so you can endeavour to embark on a road trip and see em next month too.
Islet - Ringerz
Posted by Brendan T