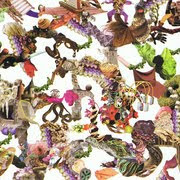 I have no idea what just happened.

The last 42 minutes I have stopped all I have doing - nearly stopped breathing, in fact - because all faculties were necessary to try to compute just what was going on in Ullakkopalo, the LP by Finnish uber altered chic-a-zoid Kemialliset Ystavad. That actually sounds harsh, but for well over a decade, Ystavad has done all he can to subvert everything music has to offer. And Ill tell you now - no matter what anyone (Pitchfork, Quietus, Dave Sitek of TV On The Radio, Ystavad himself, or me - which makes this post kind redundant) tells you, its not what you are about to embark upon when you slip this on and press PLAY.

This is the second artist from Tampere, Finland that Ive posted about these past few weeks (the other being sludge monsters Consciousness Removal Project, which is also so worth your time), and Im starting to think that I need to go back there - if only to freeze my brain to the extent where I can orchestrate fucked up genius like this. Finnish for 'chemical friends', Kemialliset Ystavad (AKA Jan Anderzen, a creative arts junkie whose avid works include installations, photography and film) has taken the electro-acoustic approach to the conventions of folk, then eschews those conventions to display a suite of sound that has every element - squeak, squelch, gleep, glitch, bleep, bump, wail, wheeze - out of place, yet together, like a million piece jigsaw puzzle, making sense only when everything is in its right place. And the listener feels just like the puzzler when that final piece is hammered home - the sensations of disbelief, relief, and utter satisfaction pervades throughout. Its weird, because within this miasma is a semblance of sense - but, just like a Magic Eye apparition, it takes all your focus to see the light. And yet you will see the light - the orchestration here is at times breathtaking in its scope and breath, at others grin-inducing at its innate simplicity. This is what Tunng might sound like if they were possessed by early 00s Animal Collective, or what Panda Bear might broach if Beck, Nick Drake and John McEntire were his spiritual totems.

Im about to play Ullakkopalo again, for the third time (its been playing its second route whilst I type this). It mightn't surprise you that Anderzen has worked with mum in the past. If only I had a bowl of weed and a mug of peyote... Actually, that would make my mind cave in. Just trust me when I say that this album is the wildest trip Ive experienced this year.

Ullakkopalo is out now through Fonal, which is a label well worth checking out - its the best place to get your mitts on Finnish experimental music that isnt Black metal, therefore its wonderfully weird and weirdly wonderful.