What The Beets Did Next 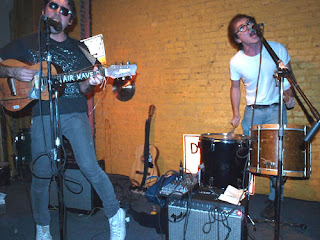 I posted some time ago about my nonplussed attitude towards Black Lips, and yet how one track was able to turn me 180 degrees into the garage punkers' sweat-drenched corner. Its the way of the musical beast - many bands can surprise you through exposure, hard work and tightening of the screws, or a complete change of tack (The Horrors last year - who the fuck saw THAT coming?) I feel a few bands might surprise in their releases in the latter half of 2010 (more of that soon...), and in a minor way The Beets have done this to me too.
I say minor because The Beets havent really scorched across my radar like a Bruce Willis-riding asteroid trying wretchedly to bring down Armageddon on my arse (sorry - first Disclosure, then this - its been a guilty as sin pleasure watching bad 90s films this past week). However, they have been lighting up in enough circles to warrant some sort of attention.
So I listened to their Daytrotter session. I understand the brilliance of this institution, and how its for special intimate reproductions of bands' current songs/influences - but I was rather deflated by the whininess of The Beets' effort (feel free to disagree - you can listen/download here).
But then I had the pleasure of being introduced to 'What Did I Do', from last year's LP Spit In The Face Of People Who Dont Want To Be Cool (a title Im not sure is too awesome, or kinda shit...). Its a rollicking number that injects enough of the hip garage swagger with punk snot that such a genre deserves. Again, one track can be enough to give a band another try - and although Im coming late, this track is good enough to give The Beets that second chance.
Although I do agree that there is such a thing as good use of piccolo - just ask Tyvek - but Beets, be wary of overkill... Either way, its a nice way to start Neck Yourself Tuesday (so much worse than Death March Monday) - so get boppin to this, and your day will start swingin in the best kind of way!
The Beets - What Did I Do
Posted by Brendan T