Divisive percussive maelstrom do the do for 'The Boys' 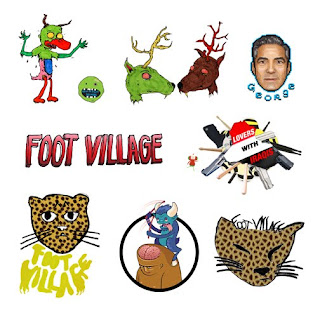 Foot Village are amazing. Foot Village are vile. Foot Village are fun. Foot Village are obnoxious. Foot Village are noisy. Foot Village are just noise.
Many opinions juxtapose what it means to listen to Los Angeles percussion and vocal nihilists Foot Village. I came in on them with second LP Friendship Nation, and whilst last year's Anti-Magic did the best to harness the myriad gleefully malevolent energies zipping around the nucleus of this group, its that album that epitomises what its like to try to listen to them unheeded. Ever tried to grin, grimace and growl? This'll do it to ya.
And that juxtaposition continues, when follows of the band are whipped into a frenzy by the schizophrenic propaganda espoused by this self-titled 'drum nation', their philosophies buffeted on the sea of sound of their own making alongside advocations for public urination. Put the fun musical aberrations adn vocal screeching of Deerhoof, the demented thrashing, rhythms and vocal screeching of Lightning Bolt, and the effervescent energy and vocal screeching of Ponytail into a blender, add a massive dollop of vocal screeching, freeze it and then smash it with a 5 iron. They are a difficult listen, my acolytes - but once you get it, you really get it.
And they are abusing/balming our ears once more with the release of a new track, 'Lovers With Iraqis' (out through How To Fight Records; the rest can be hunted down via London's biggest and brightest Upset The Rhythm). Ive tried to explain it, but just jump in head first - it IS abrasive, it IS obnoxious, but it is also fucking amazing.
What's more, the 500-strong 7" boasts the above cover art that doubles as temporary tatts! Now who hasnt wanted a pixellated George Clooney emblazoned on their lower back? It also comes with B-Side 'Totally Tween' as well as remixes from Best Coast, Yip-Yip and Universal Studios Florida.
Foot Village - Lovers With Iraqis