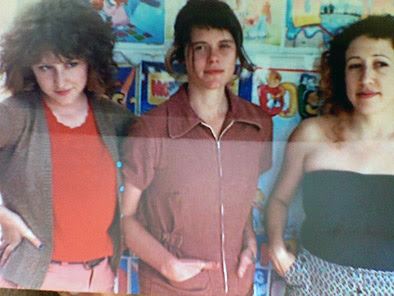 Yet another west coast lo-fi girl band? Maybe, but one of the finest in my opinion. For me the Grass Widow have always pushed there lo-fi guitar pop in a more modest manner than the other lo-fi all girl group we've seen recently and after last years two self-titled E.P.s the lack of new material from the San Franciscan trio was starting to make me worry, too many other band doing the same thing maybe? but Grass Widow's debut L.P, Past Time, feels more like a lesson in the missed opportunities of that other girls bands missed.

Wonky vocal harmonies rule this three piece, not the fuzz that others rely on, and that's braver in my book. There's a light heartedness to Grass Widow that has more to do with sixties influences like The Move or The Kinks than the obvious Delta 5, Raincoats and Black Tambourine comparisons. Easiest way to move on from the lo-fi garage DIY sound? Harmonic pop polish apparently and they've got a Upset The Rhythm gig coming up at The Old Blue Last at the end of the month. That news cheered me up.