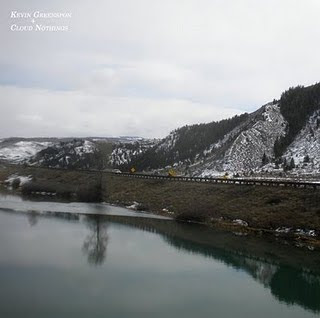 We had a nice little run of posts for the stellar Bridgetown Records last week, didnt we? Yeah, that was nice. School Knights (thanks guys for the introduction to this wonderful world), Weed Diamond (whose Carry On + Sweater Kids LP is pretty kick arse), Junior Low - all great acts, and nice guys to boot. Well, Kevin of Bridgetown got into contact with us to thank us for the kindly reviews, and to throw us some other releases he is putting out - first of all, his own...
Kevin Greenspon is a busy guy - Bridgetown is all his own work, and a truckload of releases (the vast majority of which are top drawer) have been pumped out over the past couple of years. Yet he is a musician in his own right, and is releasing a split with another Bridgetown acolyte, Cloud Nothings (Dylan Baldi to his mum).
The cover art gives the album the perfect hint on how this release turns out - such a stark, desolate yet beautiful photo (Im into stark desolate places, ok?). Greenspon holds down the starkness with aplomb, displaying a craftily dark songwriting skills set that permeates his sudden bursts of guitar noise. Having listened back over a couple of earlier releases, I think this is Greenspon's best - and Cloud Nothings ups the ante because of it.
Baldi is never going to stray too far from the sunny lo fi pop gems he offered in such a tasty way with last year's Turning On LP. However there is a hint of a cleaner sound here, which leaves me undecided on where he goes with his next venture - are his lovely crafted breezy tunes heightened or hindered by the fuzz and hiss? I guess we'll have to wait and see. Nevertheless, this is a proper yin and yang release, and as it clocks in at under 20 minutes, this ten song split is something to have and to hold. Get the CD-R here.
Kevin Greenspon - Post-Life
Cloud Nothings - I Apologize
Kevin Greenspon - Carpool Pepsi
Posted by Brendan T