Fuck in other languages is fun 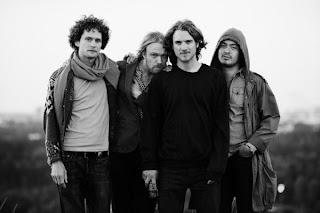 As summer packs its bags and makes a hasty retreat, intent on disappearing and not paying the tab, leaving the other seasons in its wake in an incredibly irritable mood, we Londoners have to grab every lick of sun we can and make the most of it. Hence on Sunday I went to a balcony barbecue, where me and some friends have a lovely boozy time being all sun-loving, carnivorous and a wee bit drunken. 100 tea lights and various alcoholic beverages later, Will put on some Dungen which immediately became an interesting source of conversation. I guess Ive never sat down with anyone and chatted about Dungen's virtues, but in the sepia tones of the waning sunset and drunken waves from having eaten too much and still trying to drink more than our share, it made for an interesting palaver.

Which in hindsight seems prevalent, as Dungen returned to the studio earlier this year to create Skit i allt, their sixth album, which is out today on Mexican Summer and Subliminal Sounds. The album title roughly translates to 'fuck it all', which in many ways is an apt description of how the Swedes go about making their music. There is a certain amount of mischievous wherewithal to the dynamics that is created, an aural clusterfuck that has no right to make any sense but audaciously re-enters the stratosphere as a higher being. Each song dares to be more than just one entity - never settling for a gleaming pop gem, a desert-scorching psychedelic jam, an instrumental tapestry, most songs in Dungen's oeuvre strive to be all things at once - and generally succeeds.

It is still an acquired taste for some, and doesnt always pay off. I saw them in Sydney many years ago, just on the cusp of their unveiling of their watershed album (in my opinion at least, where the alchemy finally clicks) Ta Det Lugnt, and they were fantastic - whilst my friends on Sunday who saw them a couple years later labelled them boring. And hence the dangers of alchemy - it generally comes down to chance. When wielding this much Scandinavian magic, sometimes the result will be a puff of smoke - but more often than not, it will be unique and breathtaking.

As for the below song? Imagine Elliott Smith if he played in the Beatles and that's halfway there...

Dungen - Skit I Allt from Mexican Summer on Vimeo.