The Rising Of The Son

I know next to nothing about Son Lux, New York native Ryan Lott solo project. What I do know is that We Are Rising, his second album, is the album that Brandon Flowers will never make because he is a prissy impotent fucker from Las Vegas (that ace duet with Lou Reed notwithstanding). Not that he is geographically destined to fail - Son Lux exudes enough carnivalesque flourish to fill a fake gold pyramid - but these songs are grand, verbose, fun, silky, and oodles of soul. In fact, as far as likeminded contemporaries go, there aren't many that are as adventurous as this - whilst you could highlight Beirut due to the occasional gypsy flourishes, or Dirty Projectors in the sonic pomposity and intricacies, he is mostly in tune with Tune-Yards in his abject unwillingness to give us what we expect.

There are tracks that verge on the straightforward, yet have enough that skews it all that little bit left of centre - single 'Rising' could be a Disneyfied Polyphonic Spree with piccolos. Its such an audacious album that it shouldnt work, but it does, in abundance. This is one of the most intricate yet warming albums of the year - an experimental masterclass. It will take you the rest of the year to plumb the rich seams of this album. And Lott recorded it all under a month - shit Flowers, pick your game up! 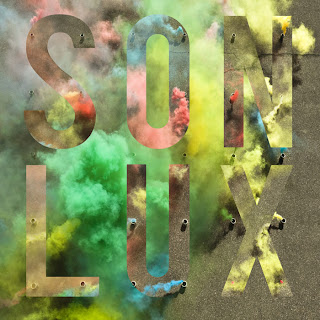 We Are Rising is out in physical form on 17th May on, believe it or not, Anticon!

NB - sorry about the Brand Flowers comparison dude. You are worth so much more than that. I heard 'Bones' on the way to work, and the slight vocal comparison stuck.

And although I have 'Rising' here for your listening pleasure, make sure you check out the rest of the album - the rest of it is better in my opinion!!