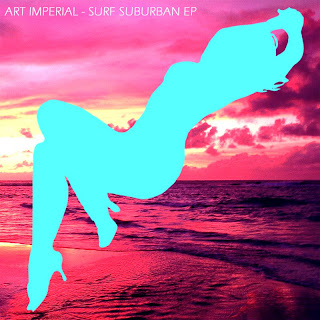 Shit its miserable in Brisbane today! All rain and bluster. Thank God then for Toronto's Art Imperial, whose Surf Suburban EP I received recently. The idea of the EP apparently came from having The Mamas & The Papas' 'California Dreamin' on repeat during a long winter period, with the wistful dreaming of standing on a white sand beach, watching crystal blue waves crash against the shore. Im with you there brother... Sure, there are umpteen inferences to other acts here, from pop pioneers The Beach Boys to more recent acolytes such as Wavves, Girls and Beach Fossils. There's even a hint of good 80s new wave under the twanging surf guitars on tracks like 'Bugs Out My Mind' that invokes the cheerier moments of the Raveonettes. All amazing touchstones, Im sure you'd agree. Nevertheless there is a genuine thematic zeal underpinning these six tracks (plus a surprisingly crystalline production) that helps to elevate them above mere mimicry. Dreamy euphoric pop whimsy maybe? Im not sure, but Surf Suburban is doing it for me. And for you folks stripping down as summer approaches, then you have an early contender to crown your seasonal mixtape.

You can get Surf Suburban at Art Imperial's Bandcamp here.