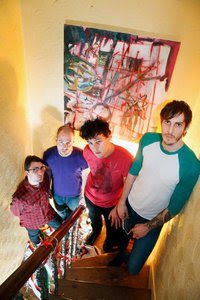 Glasgow's United Fruit have released debut album Fault Lines, and as you can hear from opening tracks 'Kamikaze' and 'Liar' (and my post heading) there is a definite adherence to dischordant yet catchy noise rock a la the Texan black clad steampunk warriors. It is clear that being in close proximity to the likes of That Fucking Tank!, Future Of The Left and Desalvo has rubbed off favourably on the quartet, as the album is a sizable jump up from EP Mistress, Reptile Mistress!. What I really enjoy about this album is the raw energy that enervates these songs - 'Red Letter' borders the noise of DFA79 in its outro - coupled with the moxy of crafting solid pop structures and being incredibly angular and loud. Its not afraid to be unbearably loud yet strongly configured, making the album inherently infectious.
Fault Lines is out May 30. United Fruit play The Macbeth on May 18.

Email ThisBlogThis!Share to TwitterShare to FacebookShare to Pinterest
Labels: And You Will Know Us From The Trail Of Dead, United Fruit