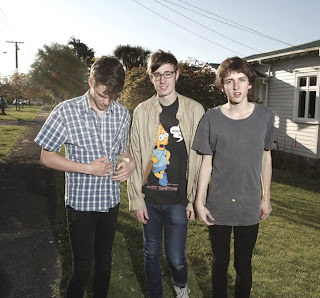 I think this is a first. I put up on the Sonic Masala Facebook page last week asking what people were listening to. Other than perennial SMer Andy, there wasn't much response - except from Phil Platt who posted the album Try Crunch from a noise band from New Zealand, Cool Cult. I hadnt heard it, so I went over to the Bandcamp to do just that - and it's fucking ace of base. Running the gamut of noise pop, from your post-punk shoegaze to your no wave and some experimental flourishes in between, the Auckland trio are willing to throw their musical ideas around with wanton abandon. But don't think there isn't substance here behind the constant application of style - these are mostly beautifully formed nuggets sound that are brimming with exuberance and ebullience (like in the track 'Unlived') whilst retaining a hard edged sheen throughout. Some may even here the entire career trajectory of one Bradford Cox in there... Im very impressed - thanks for the heads up Phil, hopefully we here at SM can do the same for you!

And if this Rapture business turns out to just have gotten stuck in traffic and is actually on its way, you could do worse than to sacrifice it all to these three kids...

Cool Cult's Try Crunch is out through Muzai Records (who are also responsible for Fatangryman who I spoke about here).