Crackin' Down The Beach Slalom 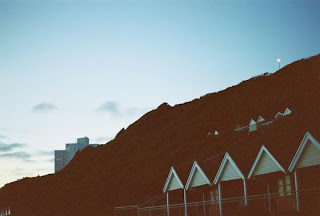 Ah, Bos Angeles. For those not in the know, its the nickname for the town of Boscombe, believed to be the heroin capital of England. Well, now it is also the name of a promising band out of Bournemouth who are doing their darnedest to craft the best melancholic beach pop outta Ye Olde England (think Joy Division meets Wild Nothing). Their genesis is much more charming than getting greasy in a smack den down by the pier too - they met making ice cream on the beach. Can I get a collective "Awwww!" Seriously though, the but now they're in a band that lots of people are getting real excited about. They only have one track of note recorded thus far, and its this one, 'Beach Slalom'. Yep, it slots right into the bedroom pop revivalist movement we've all been subjected to the past year or more, but gosh darn it if it ain't glossy, sweet and oh so lovable with a nice sheen of shoegaze noise to boot! Wont be able to dodge the Ian Curtis references Im afraid chaps, but maybe that's the point. Its an ace track, born to be played on lazy boozy summer days, so let's leave it at that, shall we?