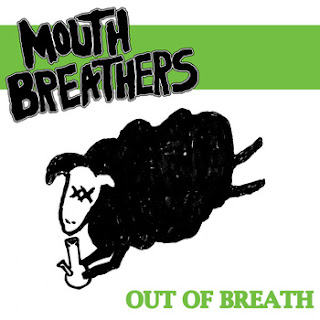 I came across the track 'Anxiety' over on Impose when I was trying to find out some material on the band Teens - and promptly forgot about them. The Kansas punkers known as Mouthbreathers (fantastic name!) roar through this track with real earnest and vitriol, sounding like an early 90s Epitaph band trying to be Minor Threat, only not sucking at it. SO I hunted down their Out Of Breath 7" and grabbed the other track, which is more sedate yet still upholds their modus operandi. And of course the Minor Threat inversion on their cover? The black sheep smoking a bong? Oh, you guys, the love in must stop! ...alright, get on with it!

A little further research let it be known that these two tracks are actually only one third of their untitled EP cassette that is (apparently) already out of stock. Lead Kyle Gowdy has put these two tracks on Bandcamp and another one on Soundcloud, and may release the others at a later date. There is also talk of a 12 song vinyl release by year's end. Now that IS something to get excited about...


05 The Creeper by secretlobotomy
Posted by Brendan T