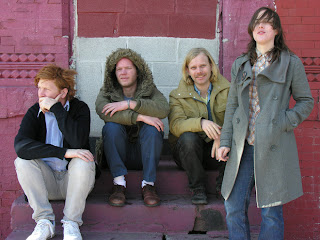 Im not sure what this is saying about me - but Ive up until the past fortnight never really fully embraced Lower Dens. Maybe its the insistence of the fraternity that loves this Baltimore quartet to call them "pretty". Blurgh. I do like "pretty" things, but I dont call them "pretty". Fuck that (and so on and so forth, as I assert my fleeting masculinity...)

Released on Record Store Day through Sub Pop is their latest single, Deer Knives. i have been frantically snavvling up a lot of Record Store Day stuff, as quite a few RSD posts this past month can attest, so I had to delve into this to see what the haze rockers had thrown at us. First of all, the fact that neither of these songs have been released before this vinyl is beautiful - I hate getting releases on RSD if the tracks can be garnered elsewhere, something The Strange Boys did and pissed me right off. And whilst these tracks aren't "pretty", they sure are damned wonderful. The title track is an offering of beautiful, feel-good distorted shimmers, with Jana Hunter's unhurried, gently soaring vocals swirling around the track in an unhurried fashion that inadvertently draws a smile from me. Then the sunshine is magnified to an unsettling, intense finish that bores into the soul - but in a way that makes you want to bear the brunt of the sound over and again. But for me the B-side, 'Tangiers', is what makes this release and has me hankering for a full length from these guys. It jangles along at an even more sedate than its predecessor, burbling along with Hunter's distinct vocals resting on top of the aural surface, buoyed by the hushed guitar and subtle basslines. It never ebbs or flows, there are no peaks or troughs - this is one constant hazy number, one that not many bands can pull off with such aplomb. At under ten minutes it shouldnt hold you attention as well as it does - but it more than exceeds expectations. Lower Dens, Im putting away the knives before they are even suitably sharpened... (NB - it must be said that since this release guitarist Will Adams has left the band due to exhaustion, and Lower Dens have canceled some shows. Rest assured though, they will endeavour to continue in some format!) 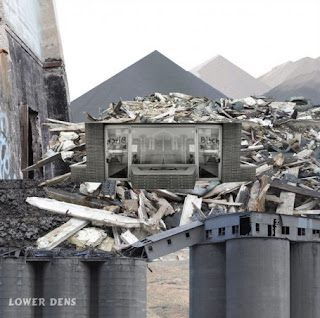