Harking Back To The Paperhead 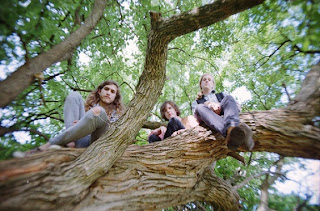 The Paperhead are a Nashville collective that have just released their debut album from the Trouble in Mind label, and at first listen it's like listening to one of your dad's warped records from 1968 that has been forgotten about and gathering dust. Add to this that the trio average 18 years of age, and you have some amazing (in)authenticity here. I know I often harp on about people sounding like others and how that can be detrimental - hey, I said it about one of the world's hottest bands, Cults, only yesterday - but here The Paperhead sound energised. Possibly haunted by the spirit of Syd Barrett or the halycon days when The Beatles were parallel time travellers, The Paperhead is so strong, its warm, effects-laden, dreamy psychedelia almost an affront to the band's youth and the state of today's music. The understanding between these three is also astounding.

Yet this could be the end - the three members putting The Paperhead to one side so as to attend college. Let's hope its not for long. Sure, they have already collared a sound that stands shoulder to shoulder with the genre's best, and we can all be happy with that - but as with all music addicts, we want more, damn it!

You can buy The Paperhead here.

Email ThisBlogThis!Share to TwitterShare to FacebookShare to Pinterest
Labels: Syd Barrett, The Beatles, The Paperhead, Trouble In Mind