Those Girls' Names Are Not Yet Dead To Me 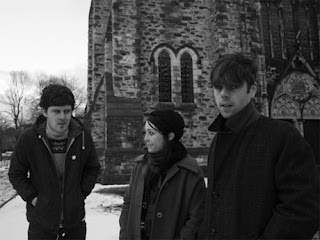 How time flies. Belfast band Girls Names booked their first name before they'd even played together back in January 2009. Yet here we are, almost 2 and a half years since that infamous date, and the trio have released their debut LP Dead To Me on Slumberland Records. They have definitely been busy before now, with many releases in different sizes and formats, and I have to say I was excited when I finally got my hands on this one.

Because as much as I like them, they have always threatened to err on the side of imitation. Supporting the likes of Dum Dum Girls hasn't helped rectify that sense of unease. And its true - Dead To Me does continue to mine the mixture of 60s shimmering beach/surf pop that so many others are wont to do in this day and age, and is most prevalent on tracks such as 'Nothing More To Say' - and somewhat heartfelt, endearing lyrics courteous of singer Neil Brogan, singing down the reverb path with his best Ian Curtis patios in check. And its very good - so likable, musically vibrant, rocks out whilst staying relatively upbeat. Yet its the old adage of "if it aint broke, dont fix it often" enough. The music has been done before in the past, and in the revivalist present, and done well. Dead To Me rivals all of that back catalogue, and surfs the crest of their contemporaries - but there is such a thing as saturation. Unfortunately Im just about at that point. As Ive said, this is still a good album, and Id still love to see them live. Its just gonna have to sit on the backburner for a while, and wait to see if it has the longevity that many of its influences have had. Except for closer 'Seance On A Wet Afternoon' - offering more of the darker trance vibe of Crystal Stilts, if the band had incorporated more of this inflection to give another side of their capabilities we might have had an immediate spinner.

Still as stated, it aint half bad, and with time comes inflection - we might see the palette expanded next time around.