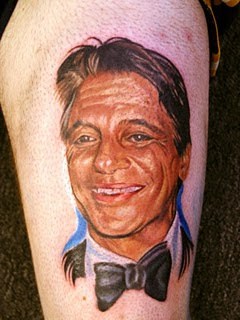 I hope that if you have this Monday off you are making the most of it! If not, just think - "What would Tony Danza do?" And the answer would be to sit back and delight in some audio-visual delights - and probably try to mount his stepdaughter Alyssa Milano. Just don't mention any reference to that Elton John song...

First we have those Minnesotans Low, and the video to first single 'Try To Sleep' off current LP C'Mon. Its cool for a few reasons - not least of which we see what is likely to be the proper resurgence of the acting career of one John Stamos! Admittedly his nihilistic ping-pong crazy version of himself on Entourage was invigorating, but this - he's a self-confessed Low tragic (rising the Stamos stocks tenfold there...) and you can tell he is putting his all into it. Well, he hasn't topped this since the heady years of Full House I reckon...(Yes, and the less said about his "star turn" in 'Kokomo' the better...)

Going from Low to the 'heavier Low', Seattle's True Widow have pulled off a truly evocative, moody affair for the video of single 'Skull Eyes' off their incredibly wordy upcoming LP As High As The Highest Heavens And From The Center To The Circumference Of The Earth. Three and three-quarter minutes of pensive tension without release, but a hell a lot of class and groove.

Long time between drinks, Fareed! The guy behind Headless Horseman brought out a great little EP last year that spoke about here - and finally he has a video for 'Wvlngth'! Its decidedly quirky and fun, just like the song - lets hope we hear more from him soon!

And finally, those varmints that make up Swear Jar has sent over a live version of 'Bury My Dead' that they did on Friday Night Fu that has me wishing they would somehow, in some way, play over here in Australia. Until that happens - IF that ever happens - Im content to revel in this...

Normally Id yell at you to get back to work, but today there is only one thing to do - tell me...

WHO'S THE BOSS???
Posted by Brendan T