Black Moth Super Rainbow Get Stuck In The Dandelions Once More 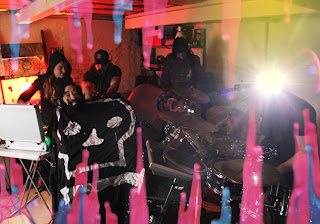 Deep in the woods of Western Pennsylvania lives a psych-pop group called Black Moth Super Rainbow. Members go by aliases like Tobacco, Graveface and the Seven Fields Of Aphelion. Sometimes their songs feel like pagan rituals in a sugarcoated fairyland. At other times they're like sad thoughts on the happiest days. And at others still, they are just plain fucked up.

The band's 2007 breakout album Dandelion Gum is a loosely based concept record about witches who make candy in the forest. As you do. These melodies were designed to toy with you, to stick in your head for hours, and to provide textures that are impossible to scrape off your teeth.

Last year when the band's label Graveface Records was by hit by flood waters, all of the available Dandelion Gum stock was damaged and the album went out of print. On June 7th, 2011, the album will be resurrected with a deluxe reissue on picture disc, cassette and compact disc. The original album will be expanded by 14 songs that were recorded during the same time period as Dandelion Gum, 5 of which have never been heard before. Other tracks included come from the out of print Drippers EP and from the 2006 split with The Octopus Project, The House Of Apples and Eyeballs.

Black Moth may have been on the back burner for the past few years while its members focused on other projects - Tobacco with Maniac Meat, Seven Fields of Aphelion with Periphery and Ryan Graveface with his band DREAMEND - but now, BMSR is set to make a return to music, all re-imagined and stronger than ever. Currently the band is putting together some US headlinging tours as well as prepping the first vinyl releases of albums Start A People and Falling Through A Field.

1. Forever Heavy
2. Jump Into My Mouth And Breathe The Stardust
3. Melt Me
4. Lollipopsichord
5. They Live In The Meadow
6. Sun Lips
7. Rollerdisco
8. Neon Syrup For The Cemetery Sisters
9. The Afternoon Turns Pink
10. When The Sun Grows On Your Tongue
11. Spinning Cotton Candy In A Shack Made Of Shingles
12. Drippy Eye
13. Lost, Picking Flowers In The Woods
14. Caterpillar House
15. Wall Of Gum
16. Untitled Roadside Demo
17. Untitled Hidden Track
18. The Dark Forest Joggers
19. Royal Firecracker Teeth
20. We Are The Pagans
21. All The Friends You Can Eat (Original)
22. Happy Melted City
23. Another Place
24. Helium Tea
25. Lemon Lime Face
26. Twin Of Myself (Original)
27. Moody Day
28. Changing You All
29. Marshmallow Window
30. Untitled Roadside Demo (Original)
31. Old Yes

Listen to previously unreleased track 'Old Yes' below - and the original clip for 'Sun Lips' below that...