Remove The Consciousness For The Last Season 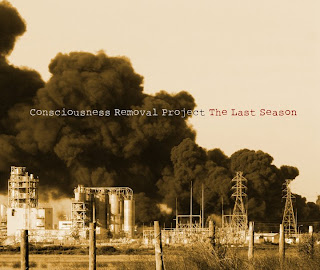 I mentioned a little release You Ever Think It's The End Of The World by Finnish act Consciousness Removal Project last year. It was a brutal mix of post metal ebb and flow with an industrial slant, and the guttural growls of singer Antii Loponen set all on edge. The new album The Last Season continues to mine this realm, eschewing the growls held throughout the majority of the tracks with some post-hardcore posturing on the final, title track. Yet it is the instrumental movements that hold one in thrall here, especially on 'Kyoto', which feels like it has been plucked straight out of a brooding, ultraviolent anime, especially with the sudden shifts in tone and sonic space. Its almost Mono-esque, not as well sewn together musically yet more earth-shattering. Its probably a little too close to the previous release to get too excited - but its still pretty worthy nonetheless.