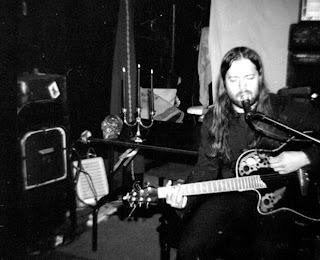 This is the first of two Bathetic Records related posts this week - great way to start off a week of amazing music!

And Im starting with the absolute highlight (no offence to the other two releases...) I had no idea who TJ Cowgill was before hearing King Dude - in fact I still don't really. He apparently runs a clothing brand called Actual Pain that Kanye West is a fan of? Weird. (But check out the website - best opening page!) Anyway, King Dude is this guy's project - and it is pretty damn awesome. The debut release from this project, the My Beloved Ghost EP, was released on Bathetic first as a cassette. Since then King Dude has released the Black Triangle 7" on Clan Destine Records, as well as an LP CD-R on Disaro called Tonight's Special Death. But Im focusing mainly on this reissue. Released in a batch of 500 (100 of which is on white vinyl), this reissue features the three tracks from the Black Triangle 7" at the end of the B-Side.

King Dude is making, hands down, some of the best modern neo-folk. Its quite dark, slightly otherworldly, but never truly authentic - c'mon, he's called King Dude! However you perceive it, just try not to get these tracks stuck in your head. They'll nestle in there like burrs. This is music sung at the break of a Western dawn, in the silence of the crossroad, around a flaming campfire, as the Devil approaches. Pass me the whisky and the shotgun - its my turn to watch over us tonight... 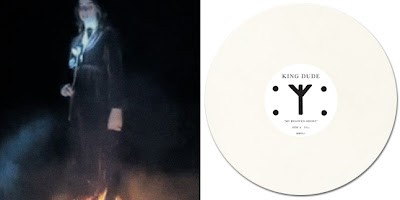 He's got a full length album coming up on DAIS Records. Until then, revel in the dark haunted beauty of King Dude's beloved ghost.