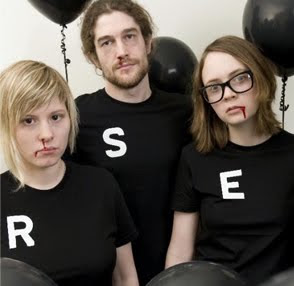 This track got flogged when I came across it in the inbox. The band - Norwich, England trio Fever Fever. The track - 'Teeth', a song that is equal parts bratty as fuck and tough as nails. The two girl harmonies here really work a treat with the staccato drumming and spiky whorls of squalling guitar. They are releasing an album this year which is exciting - but a surprising factor is the producer behind the wheel, Rob Ellis. Yes, he of PJ Harvey and Bat For Lashes fame. Not the pick for dissonant art punk - yet he saw them live and was enlivened by their visceral, no bullshit attitude to their trade. And I tend to agree with them that what Fever Fever are getting dangerously close to achieving is honest, loud, raucous, riotous, pop music with rapier sharp humour. This band are on the rise - having just returned from SXSW and Canadian Music Week, and have done three shows at the Gaymers Camden Crawl a few weeks back (alongside Kong, John & Jen, Vision Of Trees, Spectrals, Cerebral Ballzy, Divorce...) Its ferocious, its silly, its addictive. Get bitten.