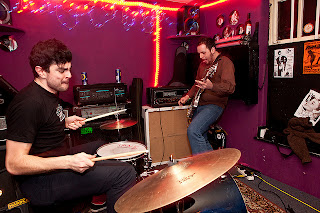 I will never forget the first That Fucking Tank show I ever witnessed. It was at the Lexington; they were supported by Friendship; it was fucking mental. And Andy Abbott's O face as he wailed on that metallic baritone guitar - it was all so ridiculous. But that's the point - this may be incredible hi-octane instrumental rock, but with song titles such as 'Keanu Reef' and 'Making A Meal For Beethoven', there is nothing serious to be taken on board here. This is a sweat inducing aural technicolour yawn of a sound, one where you are afraid you'll choke to death because you are laughing so much.

It is with great heady pleasure that we find the duo are putting out A Document Of The Last Set (out on Gringo Records), an album that celebrates ten years of these crazy bastards being in existence. It's a set list, but as they often play it - each song bleeding into the next so that you are a quivering mess after one song. There are no breaks; there is no reprieve; it is two young punks gleefully fucking things up. It's easy to see why these boys have played with the likes of Lightning Bolt, Melt Banana and Hella (even making the wider stages of Leeds and Reading in 2008). It's because these guys are relentless, yet inherent dorks, upholding a punk aesthetic with a  goofy grin. Fuck earnestness or aggression when you making noise is so much fun. Here's to ten more years - if you're up for it...