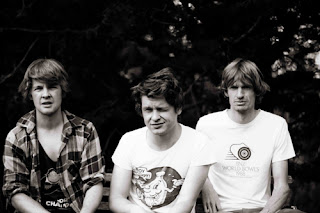 When NZ band Transistors slung me their Flux Pentaphile EP back in 2010, I was suitably impressed. I kept an eye on the trio's progress, and told a few people about this excellent ball of energy. When they arrived in Brisbane this time last year for the 2012 Bigsound Live, I told all who would listen to go check them out - and whether you caught them at the Kiwi showcase on Bakery Lane or their sweaty Rics performance, it was safe to say that Transistors had turned a lot more people onto their frenetic punk sound.

But this has all been preamble (literally and figuratively) for the release of their second album, Is It Anything? - and it slays. There isn't much variation, nor need there be - these tracks swirl and gestate, spreading out then coagulating, blasting forth and ripping back - a violent ebb and flow. It's nowhere near as self-reflexive or nervous as the title suggests - in effect there is an exuberant amount of energy infused within these fourteen tracks. Its still raw and unadulterated too - made before the band started making waves and garnering support slots with the likes of Buzzcocks and Guitar Wolf - and hopefully this doesn't mark the end of this particular era, rather than a strengthening of the cause. A truly addictive listen, Is This Anything? (out on Arch Hill) can be picked up here.