Feline Fine Under The Soda Eaves 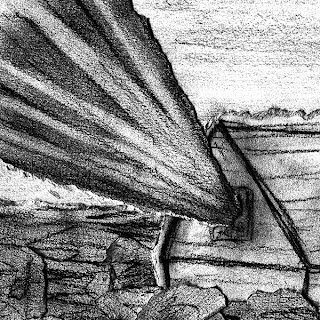 Here are a couple of small Aussie releases that are deserved of everyone's attention, from members of a number of other bands - isn't that the way these days?

First up we have Soda Eaves, the project from Hot Palms guitarist Jake Core (he also has some tomes of poetry out there). Like Drapes Either Side will be his debut release in his solo venture, and 'Doll' is the first taste. It's a more raucous affair than the studied emotions that Hot Palms plumb, but that isn't to say that this rocks. It hulks, sulks and saunters into the fast approaching twilight, sucking furiously on a tailor-made cigarette, collar up against the wind, eyes stormy. Core clearly has a way with words, and with his distinctive Aussie drawl, blown-out fuzz and cheap production, he sidesteps the suburban slacker rock revolution by being resolutely maudlin and obtuse - and therefore, ironically, a genuine article. I cannot wait to hear more - and will get a chance to, when Soda Eaves plays the Waiting Room Saturday September 7 with McKisko.


Another band from the Osborne Again label (of Velcro and other Ocean Party offshoot Shark Alarm, mainly because these bands all come from the same house in Osborne Street in Melbourne's Brunswick) is Feline Fine, made up of members of The Ocean Party and Beef Jerk. Sunny twang, cat puns, boozy ramblings, vocals everything and nothing, existence meaningful and meaningless. When ARE you coming back?