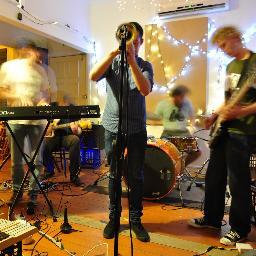 It's been a little while coming - the majority of recording was cleaned up over a year ago - but local instrumental rock band Ghost Notes have hit us with their sophomore release, Hidden Horizons. Straight off the bat it's obvious that the five-piece have taken great pains to avoid the quiet/loud pitfalls of the genre, and how. Adopting other tropes - the dirge-doom riff emanating throughout the second half of 'Pinnacles'; the jazz strokes of 'Go Where It Takes You'; the organ that underscores 'Contrails Over Plains'  - Hidden Horizons is multilayered, multifaceted, multilingual. The beauty of music such as this is to indeed transcend language in its most basic form, taking us on journeys undefined, so that we are guided and offered solutions rather than bludgeoned, a square peg in a round hole. Luke McCallum's trumpet takes centre stage here, yet unlike the theatrical histrionics of a Warren Ellis he remains muted - aloof yet engaged, a regal presence at the centre of an unfurling evolution. Owen Dengate's guitar in these tracks has become more prominent too, yet not through sheer force or distortion, but through restraint. Jamie Curran's keys hold even more prominence here than they once did, and Cameron Smith and Simon James pin down the rhythm with a more natural rapport than on By Cover Of Night. That isn't to say that Ghost Notes' debut record isn't successful - it's bloody great - but the refinement and pure emotional heft that has been imbued into these tracks is frankly awe striking. Like Dirty Three at their most introspective or Crow with Fenton fading into the background, Hidden Horizons is able to strike at the heart with a feather just as devastatingly as when it all comes down a la the cathartic crash of 'King Wave'. All of these influences meld together for ten minute track 'Esperence', but despite its length it remains a regal statement, as rigidly restrained as it is warmly immersive. Only when the urgency of 'Melt, Bloom' hits do we get anything close to a true release - and yet it's here you realise that all of this meticulousness, all of this elegance, is only part of the whole - these guys are capable of having fun too! The temptation to topple into noisy cliche avoided, it's time to end on a effortless jam, soaring towards the sun - and this time Ghost Notes plan to learn from Icarus' mistakes.

You can pre-order Hidden Horizons here (as well as pick up the digi album for a pay-as-you-like endeavour) - easily the best instrumental rock release I've laid ears on this year. They are launching it on Sunday August 25 at Black Bear Lodge, and have rounded up a special group of friends in Turnpike and Roku Music as support. Talk about a special night - Ill see you there.