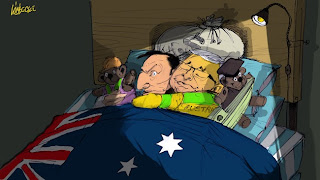 How many places are there that allows you to walk around in T-shirts and short in the "coldest" months of the year? Not many. Brisbane, and Australia in general, is lucky like that. But put that opposite the fact we have two backward heathens in their own depraved circle-jerks, taking yoga classes only so they can suck their own cock, and yet we need to choose one to lead the country - and Australia doesn't feel so much like the lucky country. And don't even get me STARTED on the 4th Ashes Test - sigh. The airwaves are flooded with idiocy and ineptitude. SO let me change that, with the aid of four willing accomplices...

NZ malcontents Die! Die! Die! managed to find a strange balance between the two anachronistic ideals of nihilism and innate melody on last year's Harmony, finding that it's possible to be approachable without losing any of your ideals. See the video for 'Twitching Sunshine'. The cyclical repetition of history beating down the minority (in this case, the black civil rights movement in the US and the subsequent assassinations and murders that can be attributed to outspoken African-American leaders of their time and, in Tupac's case, sub/slash/counter-culture). Its a crude yet excellently effective cut-&-paste stop-motion video (somewhat in the South Park vein). Boys, so glad you are back.

There is no one on this planet quite like King Khan. Here he is with his Shrines in tow, preparing to launch his first album with the band in six years, and here is another great video to salivate over. Also stop-motion, this time a claymation effort, we have the story of a series of circus carnies - a strongman, a human cannonball - and a mystic. Apparently the German team responsible for this would take eight hours just to shoot three seconds of film - that kind of dedication is admirable. The song itself is a soulful slowburner - Can't wait to hear what Idle No More has in store for us.


The Aussie contingent today is upheld by local legends Major Leagues, who went a-filmin' on the greatness that is Cavill Ave on the Gold Coast, along with a little bit of smoke machine in the pokies room at the Grand Central Hotel in Brisbane (filmed right after the Sonic Masala show we did there with Dreamtime), for their sweet-as video for 'Endless Drain'. It's as saccharine in its sweet sun pop drenched in coalescing noise, yet with some rather melancholy, deadbeat lyricism that implies that not all is golden up ahead. Still, it's a hell of a lot of fun, which is pretty much Major Leagues' MO, so don't hang your head for too long kids!

Finally, I know next to nothing about Denver collective Colfax Speed Queen, yet absolutely love their montage film clip for their 'Bathtub Crank' single. In fact, this video tells me all I need to know - a scuzzed-out racket obsessed with trashy B exploitation/zombie flicks. That pretty much ticks all the boxes for me.