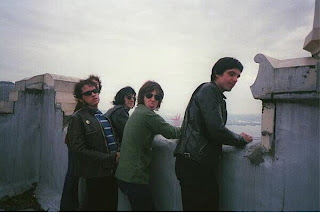 In the space of a fortnight I have had two Burger Records releases come in the mail, yum yum.

First up I stumbled across Fiesta, the double album from Detroit garage devotees The Go, when heading into the local record store to pick up the reissue of The Living Eyes - and before I knew it I had two classics in my sweaty palms. How these guys haven't climbed to the higher echelon of the garage rock movement of the past decade truly escapes me; Fiesta is like listening to the authentic playlist of the greatest progenitors of the sound from the 60s and early 70s, an intricate patchwork of touchstones that the band have finally unequivocally embraced, and instead of sounding like a tired fade-out into aperisms, this is a retro slice of lime in the most refreshing of beachside beverages. All angst and grit has been shorn away, and left we have twenty capsules of easygoing fun times. Seriously, this has become my pick-me-up rock record for the ages. You can grab Fiesta here - so much fun to be had, you gotta share it around. 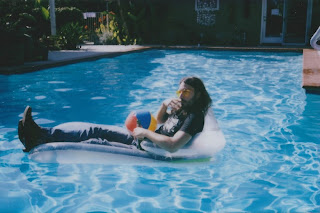 Then yesterday Shine Your Love, the latest LP from Ohio's Gap Dream flew through my bathroom window (or into my inbox), and once more I was hit for six. Expecting a downbeat dream pop netherscape, I instead discovered euphoric synth pop that was much more indebted to the Beatles and Euro-futurist consumerbabble than it was to Balearic pop. I was entranced by its tractor beam intensity, hypnotized by its faux-80s cheese yet enamoured by its inherent charm. Whilst the single is out through Fat Possum, the album proper won't be out until November, so I delved further back and tonight have been hooked on his self-titled Burger Records released record, a bit more rock oriented but still languid garage melodies. It's been like listening to the PG Irreversible of the garage rock world - no Monica Belluci, but no rape and a hell of a lot more sunlight. It's no wonder that fellow garage glam conquistador King Tuff is a kindred spirit - although Gap Dream certain goes into more transcendental realms. Thanks, Gap Dream!