A Primitive Kitchens Experience - Sonic Masala at The End 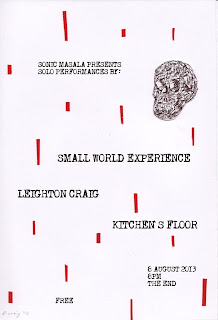 Tonight we have an incredible show on at West End's The End, the second in our solo series that has been tentatively called Campfire Tales - not because of folky charm, but more because of the surreal ghost stories and urban myths that are oft said in the dead of night in the woods when crowding around the fire, furtively looking over your shoulder for monsters unknown. Nothing about these solo artists are staid, perfunctory, orthodox - expect the unexpected...

Matt Kennedy (Kitchens Floor) - his band's two album titles are Loneliness Is A Dirty Mattress and Look Forward To Nothing, whilst songs in the bag include 'Regrets', 'Deadshits', 'Failure' and 'Kidney Infection'. Yep - Kennedy has made desolation and despair on the fringes of suburban society a grimy artform. Yet whilst I love the band's nihilistic noisy meltdowns, there is something starker, more poignant when Kennedy takes to it on his own. He is the unique voice, and it stands up (or slouches despondently) despite the odds.

Leighton Craig (Primitive Motion) - Leighton doesn't know how to quit. With his work both past and present as part of the Deadnotes, The Lost Domain, Fig and prominently Primitive Motion, Craig has enough solo immersions to add to the mix to weigh down any artist. Ever the creative, the improvisational nature that Craig nurtures often blooms into surreal, unexpected beauties, and the chance to see it happen in a small confine of spontaneity is a special one.

Pat Ridgewell (Small World Experience) - the below clip is the last official time that Small World Experience played a show. Ridgewell is the reason most people will be popping along, and with good reason. This is a rare opportunity to listen to one of Brisbane's unheralded great songwriters in action, and the intimacy of the solo set will only make this a more iconic performance.

It's kicking off at 7pm at The End on Vulture Street, West End. Its a 100 person venue, and it's free entry, so get in early - this is going to be a memorable night.
Posted by Brendan T