Captured And Taking Their Medicine 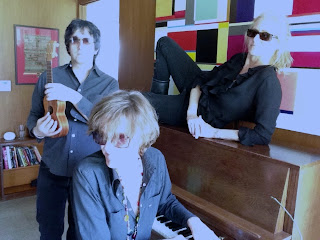 Two Captured Tracks releases in one day - what will the neighbours think???

Medicine are a band that I only knew in my teenage years because they were on the Brandon Lee vehicle The Crow. I loved that movie - and the soundtrack. Still do (for better or worse). And like Eric Draven, the LA trio have risen from the dead, producing To The Happy Few, their first album in almost two decades. TWO DECADES! It blows my mind. But then again, shoegaze squalls are fashionable again (and for many never went out of fashion). The thing about To The Happy Few (an understatement if I've ever heard one) is that it is huge - Beth Thompson's vocals are still gossamer light, floating in and out of the mix, an ethereal Siren. But just like the mythical creatures of yore, her lilting lyrics draws you on the jagged, unforgiving rocks - and you lose yourself willingly. 'It's Not Enough' is a driving sunbeam that burns the retina, yet leaves a smile permanently etched on the lips; 'Burn It' is a sinuous serpent, sleek and obtuse, deliberately toying; 'Holy Crimes' and 'The End Of The Line' are deliberately warped, bent out of shape and distorted, a SoCal psych-pop double act from the future, played by resurrected counterculture kings with barely any control over their instruments. It's much more inventive than a band apart for eighteen years has any right to be - and a testament to Captured Tracks to shine a light on these truly underrated musicians once more.

You can buy the album here.