The Eagulls Killed My Nerve Endings 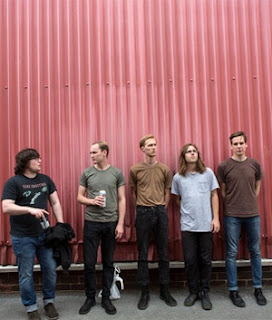 I never got a chance to wax lyrical about Leeds reprobates Eagulls' EP from last year, although we did speak about the awesomeness that was the track 'Moulting'. We are still a while off seeing an album in the offing, but they aren't short of new tunes, as 'Nerve Endings' attests - and it could be their best song to date. A post punk grind that swings closer to the band members' hardcore beginnings, the song flows into the slipstream that Holograms have razed into the musical wilderness, with more squalling guitar, military drumming and George Mitchell's impassioned howl to shake a rattled stick at. A hedonistic journey into a perennial twilight, with lashings of sex, violence, excess, isolation and anguish (mostly in that order, but sometimes all at once), rinse and repeat.

'Nerve Endings' can be found on a 7" coming out on Partisan Records next month (the b-side is a cover of Killing Joke's 'Requiem') - pre-order it here.