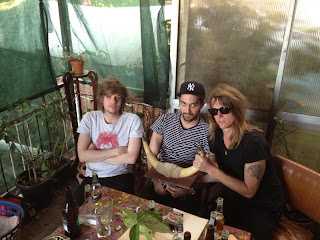 I may as well talk about the Brisbane scene in relation to actual Brisbane bands, that'd make sense wouldn't it?

Thee Hugs are three stupid fucking idiots that occasionally step up and play something that resembles music, but isn't quite. That sounds like a terribly mean and rude way to speak, but seriously, it's why I like Thee Hugs. There is zero pressure, zero expectation other than you will drink a lot and laugh your arse off to these guys. It might come as a shock, but the trio have put out an album on Long Gone Records. Unsurprisingly, it's called Drug Use & Alcohol Abuse, and it's some of the trashiest, brazen, pissing into a fan style of garage rock you are likely to have invade your orifices. They sing about someone pooing in the pool - you know this is scraping the bottom of the tetanus-infested barrel with nail-less fingers. But, like licking rusty spoons, it's a perverse pleasure. As if you don't want these guys violating every fruit in your fridge, freebasing your salt sachets and flinging feces at your sleeping children. Hell, they'll have you doing it too soon enough. Come lose your mind with us...


Buy Drug Use & Alcohol Abuse here - it's only $15 for the 12"! See - they're crazy! That artwork from Occults' Sam McKenzie is goddamn killer too - the complete depraved package.