Friday Cover Up - Shearing Off A Xiu Xiu

One of the first gigs I went to when I landed in London back in 2008 was at the beautiful Bush Hall in Shepherds Bush. I had been in the UK for about a month, and yet I was landed with the task of showing a friend around to see the sights. I had just started work out in Essex and was commuting in and out every day, and it was knocking me around - so we saw a bit of Trafalgar Square and Soho, ate some crumbed mushrooms (?!) then sunk some pints, before I convinced him to come see the double billing of Shearwater and the Constantines for five quid. Both bands played for over an hour, and I came away adamant that this was going to be the start of my love affair with the place. And so it was. 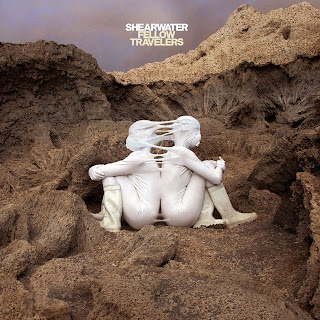 I have to say that I've had a crush on Texans Shearwater since that day too. So the fact that their latest endeavour is Fellow Travelers, a series of covers of bands that they admire and have toured with over the years, pretty much means that this segment is locked up til the end of the year. The first taste of the record is a cover of Xiu Xiu's 'I Luv The Valley (OH!!)', and it's a raucous release that energises. This has some resonance for me too - the only time I saw Xiu Xiu was the last show I reviewed for the first magazine I ever reviewed for, Low Rise, back in 2010. They were supported by a burgeoning Zola Jesus, who stormed around the stage like a trapped animal, howling and soaring over a backing track only - and she blew them out of the water. At least here Jamie Stewart gets a little ground back - but only because Shearwater are at the helm. And it's just in time for new ZJ material as well, hmmm... Fellow Travelers can be pre-ordered here - it sounds like the kind of covers album to savour with the likes of St Vincent, Clinic and Smog being reimagined. Have a great weekend everyone!