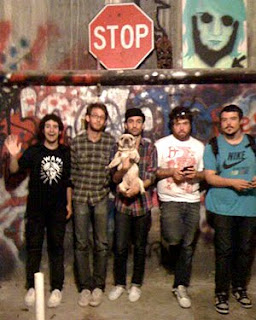 Miami psych playas Lil Daggers were one of the first bands to contact Sonic Masala in its infancy to flog their wares. As we are the No Junk Mail kind of chaps we told them to fuck off and take their Gideon's Bible with them. But they persisted, we relented, and our collective minds were suitably blown. Since then Lil Daggers have prepped their debut album, Lil Daggers, and the sucka came out on Tuesday. Its mega rad of death - and I thought Id wax lyrical with the guys so they could say as much.

SONIC MASALA - First of all, congrats on the imminent release of your debut album! How has reception been for the new material thus far?

LIL DAGGERS - It's been pretty great, excuse the cliche, but I guess this is what it means when a band's sound matures. I feel this is our most collaborative effort to date, and there's a representation of each of us in almost every track.

SM - How has the experience of recording this album differed from the recordings you’ve put out in the past?

LD - We took more time to do it, and we had a better plan as far as what we wanted the record to sound like in terms of production.

SM - Much has been made of the organ. Ive heard from different sources that the organ makes your sound garage psych, or that you are the garage Doors (this one made me laugh pretty hard). Whats the genesis behind the organ and how does it figure in the composition of your music?

LD - Well, Reuben has an organ, and the rest of us wanted him to be in the band. Things just kind of happen with us, we're not really the pre-meditating types.

SM - Simple haha! From the few tracks Ive had from you guys over the past eighteen or so months there’s a real electric vibe you pick up on that seems transferrable to the live performance – that in fact the studio releases and the live stage versions would not be too dissimilar. Do you record what you play live, or will there be any ‘bells and whistles’ surprises when we hear the album?

LD - For the exception of a few guitar and vocal layers, there's not much difference between how we record and how we perform our songs. Maybe we play them a bit harder and faster live.

SM - You come from Miami, an area whose music scene certainly isn’t globally heralded like other parts of the US. What can you tell us about the Miami music scene that you feel makes it an exciting place to be a part of? Are there any local bands that you think encapsulate “the Miami sound”?

LD - Miami is a new city, 30 years ago there was nothing here. So the music scene here is very young. Also its a city made up mostly of people who fled their countries in search of money, so unless money-making is involved there's not much support for youth culture. A lot of good bands never get the exposure they deserve, and not too many options when it comes to venues. It's gotten so much better though, which is exciting. As far as bands go, Miami and South Florida in general have an amazing roster right now, Beings, The Jameses, Love Handles, just to name a few examples.

SM - You’ve had some interesting support slots in recent times, including one show last month alongside Jacuzzi Boys and Jeff The Brotherhood. How has the touring been going, and what have been the highlights?

LD - Touring went great, obviously there are ups and downs but overall it was a good time. Chicago and New York were such good shows, we always have a great time in the big cities.

SM - So far we’ve heard ‘Slave Exchange’ from the new album, and its pretty killer. The organ is definitely prominent on this one. Is it indicative of what to expect from the rest of the long player?

LD - The LP has a good amount of variety in it, I don't think any two songs sound too alike. The organ is present throughout most of the album, but not constantly. There are some bangers and some downers in there too.

SM - How do you think you fit into the garage rock movement? Do you feel you fit in? are there other bands doing what they do that you feel a real affinity for?

LD - That's a hard question because we're still a relatively young band, and I'm not sure we fit in anywhere yet, but there are plenty of bands we like out there: Brown Ghosts, Jeff The Brotherhood, The Growlers, Nerve City. All keeping music evil, too.

SM - Fuck yeah, Nerve City!!! So what does 2011 have in store for you guys then? Do you have other projects in the wings?

LD - We're thinking of recording another single before the year ends, and hopefully put out a video or two. Eagle (Lil Daggers' drummer) also plays in a psychedelic funk outfit called Psychic Mirrors, I'm sure they'll be a making a splash once their single is out in a few months.

SM - We here at Sonic Masala love our music, but as is evident from the name we also love our food – what would you say is Lil Daggers’ trademark food of choice?

LD - Bandeja Paisa, a Colombian meat feast on a platter. Look it up.

SM - Will do! Finally – what is sonic masala?

LD - The sound of a pretty girl's lip smacking after applying and spreading on her lipstick.

Mmm, sassytime! Lil Daggers is out now through Livid Records.