Cults Will Abduct You 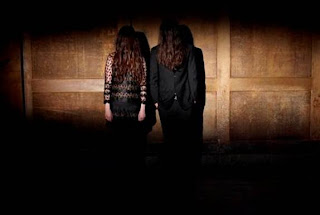 I still cant get over how big Cults are becoming. There's no doubting how addictive their songs are - I heard 'Go Outside' on the radio yesterday and forgot how evilly infectious that little beggar is - and the biggest hit post on Sonic Masala has been my post about their upcoming shows in London. The blog wasteland is also awash with gushing Cultophiles. Its culminated in the duo of Brian Oblivion and Madeline Follin being one of the most watched at SXSW, the likes of Vogue, New York Times and Spin (among others) declaring them one of the bands of the summer, and their debut, self-titled LP – released on May 30 on In The Name Of and Columbia – becoming one of the most hotly anticipated releases of the year.

New single 'Abducted', a gloriously compact song which packs a considerable punch in under three minutes. It’s a track which builds beautifully and unexpectedly from a hushed intro to an absolute belter of a chorus, with Madeline singing, “He tore me apart ‘cause I really loved him/ Took it all away and left me to bleed out, bleed out”, expertly meshing a sinister undertow of dark, twisted love with bright, instantly infectious melodies in a way that only Cults know how to do. Its enthralling, bewitching stuff, yet another tantalising teaser from the Cults album and just another reason why they will undoubtedly justify all the hype.

Furthermore, Cults once again grace London's stages, this time in a much bigger venue (Scala) May 24th amid doing both the Great Escape and the Dot To Dot festivals. Start reaching for the Kool-Aid...

Email ThisBlogThis!Share to TwitterShare to FacebookShare to Pinterest
Labels: Columbia, Cults, In The Name Of Records, Scala