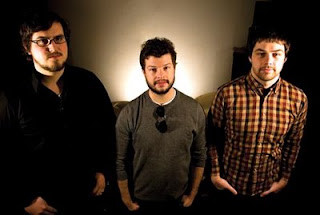 I will solemnly swear on a stack of Necronomicons that discordant Louisville Kentucky noise rockers Young Widows’ last album, 2008’s Old Wounds, was one of the most underrated rock albums of the last decade, showcasing a band willing to infuse their incessant squalls of distortion and dark angst with moody gaps and silences that most bands of their ilk are unable or unwilling to procure. I can't believe how little fanfare these guys get. They destroy, then resurrect so that they can kill again. They are a canny band, offering rock that cajoles as it bludgeons, sliding along in the darkness, seductive yet destructive. And they make the Apocalypse seem sexy.


Their follow up LP, In And Out Of Youth And Lightness (out on Temporary Residence, also about to drop Explosions In The Sky's new one - nice way to go guys!!) heightens the trio’s penchant for traversing the tightrope that separates the dark dirge of sludge rock from the dangerous sexuality of desert rock, yet does so in such a manner that is often jaw-dropping. The unrelenting crawl through In And Out Of Lightness explodes to a call and response ending that wouldn’t be remiss on a more psych tinged effort, whilst Lean On The Ghost’s repetitive broiling thunder perfectly encapsulates the themes of isolation and loneliness. First single Future Heart is as close as a straight up rock song as Young Widows gets – its rollicking and dark and addictive, and close to the weakest track here. Evan Patterson’s impassioned growl perfectly captures the brooding nature of lyrics such as “Seal up the cracks in my voice then swallow the pity like rain/To avoid the black cloud” from The Muted Man, while the brutality is always wavering, barely reined in, by bassist Nick Thieneman and drummer Jeremy McMonigle.

In And Out… is an album of constant doom and dirges – there aren’t many light moments here at all. But as the re-emergence of the excellent Swans last year attested, darkness is often far more exciting and liberating than the light. Young Widows take up the dark mantle perfectly. Seriously, get this if you want to know how to live. 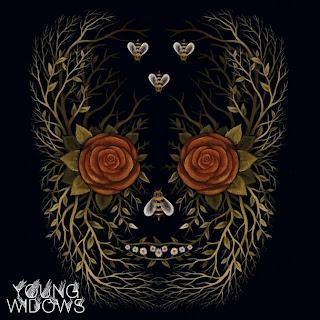 In And Out Of Youth And Lightness is out now. The artwork is, as usual, brilliant. And what's more, you lucky devils over in the US get to see them live next month - with support from their BFF's (and SM mega faves of death) My Disco! If you dont go to this show, you're dead to me. Dead.

Young Widows - In And Out Of Lightness