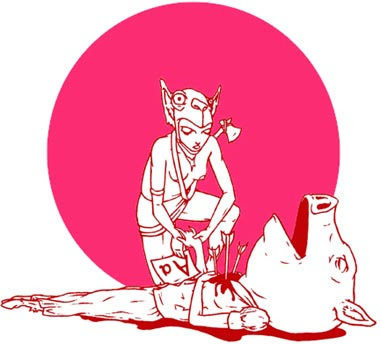 NY percussive miscreants Aa (pronounced Big A Little A - hmmm) are re-releasing their 2007 album gAame, plus a couple other little pressies, as a new album of sorts called mAate (through Sensory Projects Records), and are following that up with a tour here in Australia, playing at Woodland on May 5. This promises to be something else - a cataclysmic sound that owes much to the likes of Ponytail, Black Dice and Battles amongst many more (Foot Village also comes to mind) for paving the way to making crazy noise montages a more viable sound, thus allowing them to come our way! They were involved in The Boredoms' drumming revolution Boardrum last year - so they are at THAT level...

Oh, and their artwork is fucking amazing. Aa's Aron Wahl is responsible for the above piece, plus all their cover art and most of their post work - seriously, hunt it down, its really impressive - look at some more here!
Aa - Crass
Posted by Brendan T