Interview - Pains Of Being Pure At Heart 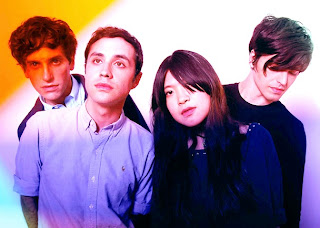 The rollercoaster keeps rising higher for Brooklynites The Pains Of Being Pure At Heart, as their second LP release Belong showcased the burgeoning talent that has been promised over the past 2 years. I feel for these guys, as the hype that has surrounded them pretty much from the get go has been debilitating at times, but they keep on offering slinky slices of noise pop that is equal parts Smashing Pumpkins and Depeche Mode. I spoke to their lead vocalist/guitarist Kip Berman to see whether their lives were mirroring the bombastic mores of their current batch of songs...

SONIC MASALA – 2011 appears to show no slowing down for you guys. Where are you right now?

KIP BERMAN (PAINS OF BEING PURE AT HEART) - Today is album release day in the USA for us. I'm in my apartment, but Peggy (Wang - keyboards/vocals) and I are going on our friend Maria's college radio show later today (WNYU 89.1 FM) to hang out and celebrate.

SM – Congrats man! So - you have just brought out Belong, your follow up to the massive self titled debut of 2009. What would say was your aim when you entered the studio and how it differed from your first time out?

Kip - We wanted to make an American pop record, a record that didn't need to be explained to be understood. We really wanted that sense of immediacy, of capturing a strange and amazing moment.

SM – Working with Alan Moulder and Flood must have played an integral part of how Belong came together...

Kip - Yeah, those guys are the coolest and incredibly down to earth, humble and funny. PJ Harvey, Nick Cave, The Associates, Jesus and Mary Chain, Ride, Smashing Pumpkins, Curve, NIN, The Sundays, Depeche Mode, Yeah Yeah Yeahs, MBV - the list of things they've had a hand in are some of the most amazing records of the last 30 years. Maybe the most amazing thing that's ever happened to our band was getting a chance to make this record the way we thought it should be. No matter what people say or write, these songs sound the way we wanted them to sound. Our first record will always be our first record, and that's something that's inherently a special thing - and Archie Moore (Black Tambourine, Velocity Girl) deserves a LOT of credit for that first one due to the mixing he did on it. But we're super proud of these songs, our playing and how we worked to make it sound the right way. We took a risk - a lot of people might hate it, but we believe in it 100 percent.

SM – But Belong still appears to be juggling the same predispositions as your surprise breakthrough. What has changed in the POBPAH camp in the intervening years?

Kip - Christoph (Hochheim - guitar) is playing with us now, so that means we have to write songs that have two guitar parts instead of one - that's pretty fun, and opens up a lot more possibilities and makes things sound a lot more exciting live. But aside from that, not much.

SM – Its the angsty anguish and melancholia that has fuelled many of your aural delights, but they are steeped in teen nostalgia – what has changed, if anything?

Kip - I never think of it as "teen nostalgia" - we only mention the word "teenager" twice on the first album and it's followed by "in love with christ and heroin" and "waiting for death at 19." The feelings that go into our songs don't suddenly stop when you turn 20 - life is an ongoing series of awkward, fumbling, weird moments of finding out who you are and what you want to do.

SM – Has the incessant media spotlight gotten easier over time?

Kip - It's not incessant. If people want to ask us about music, we're always happy to talk about it - it's what we'd want to talk about anyway, even if we weren't in a band. We're not Jay Z or Justin Bieber or Lady Gaga. The security people at the airport always ask us what band we're in, and no one has ever heard of it - and usually they have to ask us to say the name 2-3 times to fully comprehend it.

SM – Speaking of, much media attention repeatedly turns to NY and Brooklyn. How has this region helped to colour you music? Is there a collaborative musical support system there, is it a creative hub, or is it a dog eat dog environment that forces the best out of bands that get thrown into the mix?

Kip - We're from the suburbs and moved here just like every other band "from" here except maybe The Strokes, Jay-Z and The Beets. So I think that perception of New York as a cut-throat, Wall Street "in it to win it" place is sort of misguided - most people are nice and supportive and go to see each other's bands and are happy when their friends get to do cool stuff. Starting out we were huge fans of bands like caUSE co-MOTION, Crystal Stilts, Vivian Girls, My Teenage Stride and The Besties. We'd go to their shows and the fact that they were doing music and doing it well was really inspiring to us.

SM – You once again graced SXSW this year. How was that? Any particular highlights?

Kip - I got to hang out with Veronica Falls at the breakfast area in the Best Western Hotel and eat some cereal. I haven't seen those guys in a long time, and it was good to share a bowl (not the kind that usually gets shared at SXSW, mind you)-- Corn Flakes. I also saw Surfer Blood (we toured with them last summer), Piper from Puro Instinct and John Maus in the lobby. Maybe that was the Chelsea Hotel of our generation. But instead of junk, there was junk food - lots of free jelly beans and Mike + Ike's at the front desk, actually. All those people mentioned are super nice if you're wondering - plus their music is special. We're fans, at least. Other highlights? Hanging with the guys from Weekend (also former tourmates and current labelmates), running into the rightfully legendary David Gedge twice (GEDGIE!!!), seeing lots of old friends and making lots of jokes about "gotta get signed. gotta get the deal," which is our yearly SXSW tradition.SM – I actually caught you at the My Bloody Valentine ATP in December 2009 – well, I kind of did, I was there, but I don’t remember much. Since then you have kept the touring juggernaught rolling. What places have really blown you away, and have there been any that have just...blown?Kip - ATP was really cool and it was a huge honor to be asked to play the event, as it was curated by a band that really exists as one of the all time greats of what you can do with rock music. It's hard to feel like you suck when MBV thinks you're ok - plus we ripped off their Sunny Sundae Smile EP a lot when we started the band, and I'm sort of glad they took it as a sign of respect. To me, that EP is pretty much a perfect example of emphatic, euphoric guitar pop, always on the verge of going off the rails. What can get better than that?

SM – Can we expect any tours to either the UK or Australia this year?

Kip - UK, hopefully. But I don't know yet about Australia.

SM – Favourite track/album at the moment?

Kip - Weekend's Sports sort of flew under the radar when it came out last year, but it seems now people are starting to hear it and I'm glad.

SM - I agree, it was one of my faves of last year!

Kip - Those guys rule, and we were lucky enough to do a small tour with them last fall. They also DESTROY live. I really like Twin Shadow's debut LP Forget - we're going to be touring with them in the USA and I'm pretty excited about that. I'm psyched for the new Crystal Stilts record (Slumberland) called In Love With Oblivion as well as The Vivian Girls (Polyvinyl) Share the Joy, which will both be out soon. Finally, Alex said there's a new German Measles record, and that totally surprised me, but if it's true I want to hear it, as their EP was super good - especially the song "Wild Weekend." I also am really enjoying the Puro Instinct record Headbanger's in Ecstasy - it's subtle, nuanced and holds up to repeated listens. I hate saying it just "feels cool" because that seems superficial or overly subjective. But the record just has a really unique feel to it, as well as some really amazingly crafted songs like "Love Goon," "Stilyagi" and (my favorite at the moment) "Silky Eyes."

SM - Sweet! I havent heard the new Puro Instinct album yet, and am super spyched for Crystal Stilts too. Finally – what is sonic masala?

Ah, but what type of pizza, hmmm? 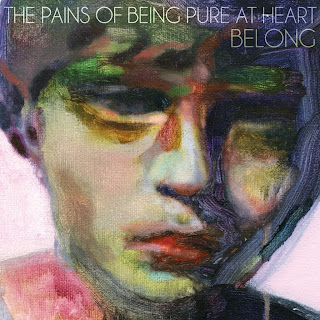 Belong is out now through Slumberland Records. POBPAH are touring the US this month with Twin Shadow amongst others, before hitting Europe in time for summer. They play Electric Ballroom on the 8th June, plus a handful of UK shows and some obscure Euro festivals, so there are ample opportunities to get your fill.

The Pains Of Being Pure At Heart - Belong

Email ThisBlogThis!Share to TwitterShare to FacebookShare to Pinterest
Labels: Pains Of Being Pure Of Heart