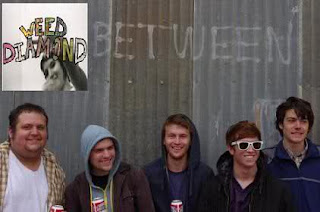 Last year I got pretty excited about a release out of Bridgetown Records by Denver band Weed Diamond called Carry On + Sweater Kids, an amalgamation of their last two EPS. I even included it in my personal top ten albums for 2010. However things have been ultra quiet on their front, and I have recently got the news - Weed Diamond are no more, burning out ultra fast in less than two years. Bridgetown Records founder Kevin Greenspon received the affirmative on this when talking to Tim from the band earlier this month. Whilst this is sad news for lovers of no-fi garage popsters everywhere, not all is lost. Two projects that were borne outside of Weed Diamond - guitarist JT's solo stuff as Junior Low, and Michael's band School Knights- are still about, making music. In fact this may be a godsend - with both of these acts showing as much if not more promise than their predecessor, we might see a more concerted effort to produce material from this end.